For this unit, my classmates, instructor, and I engaged in a group storytelling endeavor using Twitter. We each contributed additions to the story one tweet at a time, and were therefore given just 132 characters (8 characters were reserved for the official story hashtag). No one could post 2 consecutive tweets. Our instructor provided the initial tweet as a story-starter and off we went! We tweeted open invitations for anyone following us to participate in the story, but no one took us up on that offer. I blame this on how busy everyone is!

The story started with a bang and I had high hopes for it’s development. New characters were introduced and a plot started to develop, but ultimately that story just didn’t get very far in the month that we worked on it. We could come up with great material but somehow the collective effort kept the story from fully developing. Our instructor shared with us afterward that this is typically the case. I think this has a lot to do with us adding such tiny bits, having no shared overall vision for the story, and that our contributions were so spaced out. Occasionally I went to the story archive and re-read it before posting but usually I went mostly off of memory and what was just posted.

Presentation of Our Shared Story

As part of this experience, we were tasked with creating a digital product in some way related to our group’s story. Below is the graphic novel that I made that is inspired by a portion of it. 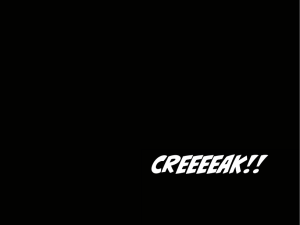 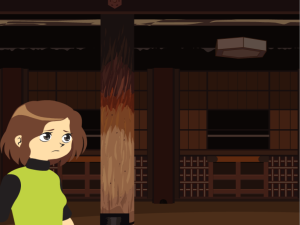 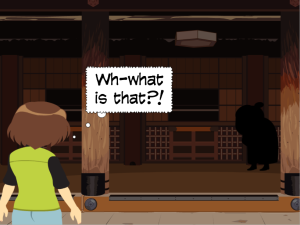 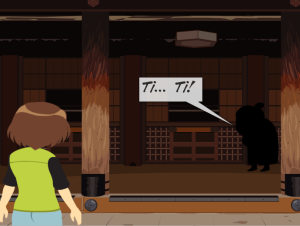 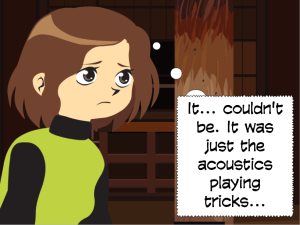 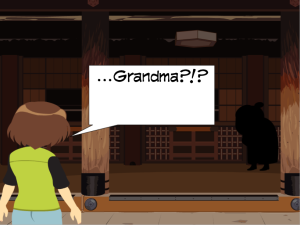 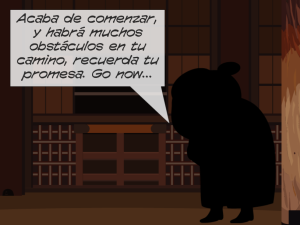 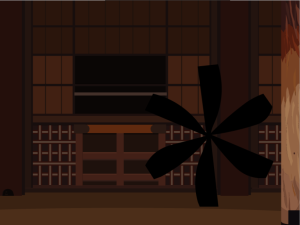 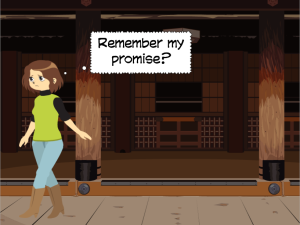 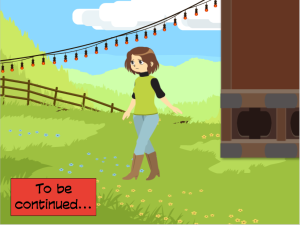 I selected this portion because it was my favorite scene. I love the imagery in the beginning of the story, the part conveyed here. I love how much unknown there is. I’m a big horror fan so I thought that was the direction the story would go and I was excited. I also really loved the surprise and intrigue I felt when a classmate introduced the Spanish language bit! I thought that the place I chose to stop my graphic novel lent itself to a chapter or episode break.

The following is the text that the graphic novel is based off of. View the story archive to read the entire story.

The door swung ajar with a heaving moan.

Ti stood staring into the inky black darkness and felt the goosebumps raise across her skin. She couldn’t quite identify the smell. It was a cross between rotting wood and wet dog… Why had she been led to this abandoned ghost town? She took a step forward, but hesitated, unsure if it was safe. The smell attacked her nostrils with ease now that the door was open. She paused momentarily. Only long enough for her eyes to adjust absence of light.

At the other end of the room a shape appeared. Her heart pounded faster. ‘Did that shape just move’ she thought. She debated going back but just then the door slammed trapping her. Ti’s breathing quickened in panic. The shape across the room began to speak to her, calling her name in a familiar voice. ‘It couldn’t be…’ She held her breath for a count of three, willing her heart to slow. ‘It was just the acoustics playing tricks.’

“Grandma?” she called out tentatively.

Ti’s heart caught in her throat. Her hand instinctively reached out to the woman she had missed for so long. And just like that, she (or IT) was gone. “No, Wait!” She yelled out but it was no use. ‘Remember my promise?’ She remembered promising a lot of things but nothing stood out. She began fumbling around the room. Searching for some clue as to where she was, and why.

Ti tried the door, which now yielded to her gentle tug. Outside, the Andalusian countryside baked in the hot afternoon sun. She walked away from the building until she was out of its shadow. A deep breath replaced the smell of fetid wood with berry fields. She pondered the strange occurrence in the building and wondered if that thing was really her grandmother or if it was some trick.

At first, I was utterly lost about what to do for my project. I felt totally uninspired and lost in a sea of so many choices. Failing to find my way by looking at the story, I diverted and started exploring tools that can be used to create/tell digital stories. I googled, searched Twitter, pored over tool lists, read reviews where available (I highly recommend this blog!), previewed many of the tools themselves. It was a great exercise in seeing what is available that could be used for future projects.

Eventually I found myself inspired to doing either a picture book or comic book presentation, and then drawn to Creaza as a specific tool. I had trouble setting up a free demo account, emailed Creaza’s help team, and they quickly set up the account for me — and mentioned it was a known issue. The demo account is quite robust and you can do complete projects with it. They also have paid classroom level and school level accounts. There are actually 4 separate tools included with Creaza: Cartoonist (what I used), Mindomo (mind-mapping), Movie Editor, and Audio Editor (the latter two look quite robust). I only explored Cartoonist. I thought that the projects they had posted were sample projects, but in fact they are stand alone themed templates with media specific to that theme. This ended up being very limiting for what I wanted to do. I couldn’t take a backdrop from one theme and use it in another. You select the theme template and you only get what is inside of that specific one to work with. The Manga theme seemed to be the only one that would work for my needs because it had the dark interior room as well as great figures to work with.

As you can see, I was given 6 poses for my main character, Ti. Within most poses, you can change her facial expression to preset emotions: normal, happy, sad, and angry (I used “sad” throughout because it best conveyed the character’s concern and confusion). Using those, along with zooming, flipping the character images, and putting figures into silhouette, I was able to create quite dynamic imagery that really told the story.

The interface was quite frustrating to use at times. Sometimes it was easy to get into editing screens. Other times it seemed like no matter where I clicked, the particular editing screen I wanted wouldn’t open (until it did seemingly at random later on). I also struggled a great deal with trying to get my limited options for visual elements to work with the story. I really wanted the room she was in to be darker but that isn’t adjustable (most backgrounds can be set to night or day but interior rooms would only show that change in a window). I wanted more backgrounds so the last scene didn’t have party lights (there’s also some silliness behind the building, which is actually a chest that I made really large because it was the only thing close to a building appearance). I needed to have her reaching out to grandma’s ghost but the only arm extension is a fist while she is running (I made it work but you can’t alter the images provided). That sort of thing. All this said, I used Creaza in a way it wasn’t really meant to be used. If I had used the images to inspire a story, instead of the other way around, it would have worked much better.

Another serious issue I had was that the sharable and embeddable story viewer displayed my frames differently than I saw them in the editor. Characters are missing, bubbles are missing, etc. You can see what I mean here. I could not figure out for the life of me why it was doing that or how to fix it. It was also tricky to find where you can share it out. It isn’t within the editor, but rather on the screen that shows the projects you have made. Just to further my frustration, when I tried to use their option to export as a .pdf, things still didn’t look as they did in my editing screen BUT the issues were mostly different issues than what appears in the viewer! I gave up on both. My workaround was to screenshot each frame from within the editing screen.

I hope this company is able to work out the bugs because it has the potential to be a really awesome tool.